Continue reading to discover the advantages of the Feng Shui frog and its location. The three-legged toad is a symbol of riches and success in Feng Shui.

The frog has long been associate with prosperity in Chinese culture. According to Feng Shui, having frog figurines around the house or business protects the area and promotes wealth in the owner’s life. The three-legged toad, also known as the money frog, is a well-known Feng Shui sign for attracting riches and financial prosperity. For its installation, there are, nevertheless, particular guidelines. Here is a diagram showing the proper orientation for placing frog figurines according to Feng Shui.

Are you looking flat for sale in mumbai?

Meaning and significance of the three-legged frog in feng shui

The three-legged toad, often referred to as Jin Chan or Zhaocai Chan Chu, is employed as a Feng Shui remedy to draw riches and success. It represents luck and a long life. As it is seen with two front legs and one rear leg or tail, similar to a tadpole, it is known as the “three-legged toad.”

Money frog sculptures made of metal or from precious stones like jade are very common. According to Chinese tradition, three-legged toads are frequently depicted in ornamental art. In Chinese imagery, frog and toad are sometimes used interchangeably. A toad may, however, be represented in a different way by having symbols like Yin and Yang on its back or on the top of its head. The Feng Shui frog is typically shown as sitting over a bed of coins or gold ingots and holding a coin in its mouth.

The mythological three-legged toad is said to be able to create gold and silver coins from its mouth, according to Chinese tradition.

Some of the well-known stories about the three-legged toad are included here.

Placing the frog according to Feng Shui

The location from which all energy enter the house is the front door. A money frog placed at the entrance door makes a big impression and draws luck. When placing the money frog at the main entry door, care must be taken with the direction it faces.

Typically, we put a beautiful statue towards the exterior and the guests. A money frog, on the other hand, has to be positioned such that it faces the interior of the home. With this setup, the money frog is certain to attract riches and positive Chi energy to it and reflect it in the direction that it is facing.

The wealth section of the home is linked to success and plenty. It’s crucial to locate the riches corner while deciding which direction to place the fortunate frog. Place the figurine in the home’s wealth corner using a Feng Shui Bagua map. Standing at the front door of the house and facing inside will help you locate the wealth area. On the Bagua map, the riches zone is shown by the southeast corner. 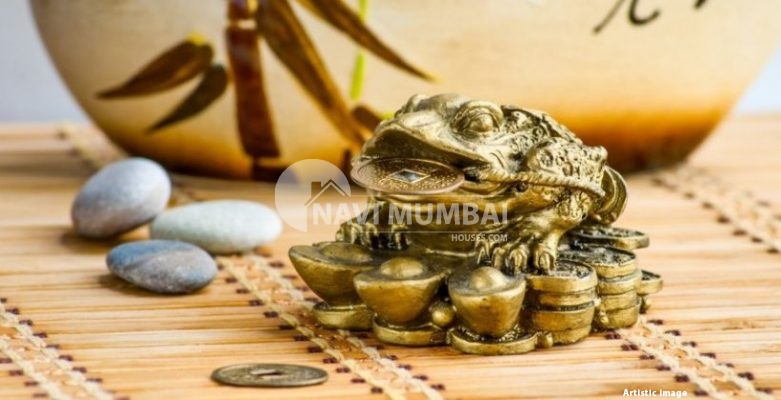 The career sector of the house is where you may put the money frog. Your job and career are represented by your desk. So, you may put the frog figurine there to advance your professional standing, financial well-being, and success.

A wallet is another great place to put the money frog. Money and riches are associated with the wallet. Keeping a fortunate frog will thus open your wallet and draw money. This is also considered lucky since it keeps the fortunate frog near to you wherever you go.

The money frog can be positioned diagonally to the front door of an office. Keep the statue close to the cash register, pointing inside or in the direction of the interiors of the space. This arrangement brings in outside funding.

An altar or a meditation area

If kept in the home’s meditation space or altar, the blessed three-legged frog serves as a spiritual reminder. This position enhances one’s spiritual life while bringing riches and success.

The money toad is the ideal addition to the backyard, garden, or other outdoor areas with ponds or other bodies of water. This location draws wealth while complementing the interior design. Feng shui frogs should be placed in groups of three.

The fortunate frog can be kept in groups of three. The harmony of earth, heaven, and people is symbolised by the number three in Feng Shui. The luck of heaven is unlocked by the number six, while the number nine denotes greatness in terms of strength, plenty, and eternity. Even maintaining five or nine fortunate frog figurines is an option; they are said to be auspicious.

Placement of the frog in Feng Shui: Things to avoid

According to an old myth, the Feng Shui Frog spews out gold and silver. It is therefore viewed as a lucky representation of wealth and success. According to a well-known myth, the money frog shows up at a house’s front door during a full Moon while holding a coin in its jaws. According to legend, the lucky frog enters the houses of those who are fortunate enough to get good news.

Keep the lucky frog figurine at your home’s far-left corners, which are thought to bring you money and success. This layout will, according to Feng Shui, benefit the occupants by bringing riches and success to the home.

According to Feng Shui theory, the fortunate frog represents knowledge. Keep the figurine of the frog next to the study area so it can transfer good energy into the home as wisdom. The family’s general wellbeing will increase as a result of this placement.

Encourages the flow of good energies

The house will get more good energy if the money frog is set on a pedestal that is slightly raised. As the frog will absorb favourable financial energy, it will also signify money accumulation.

The fortunate frog is thought to improve one’s outlook on life and job chances when put in the career zone. Maintaining this lucky symbol also aids in enhancing focus when working or studying.

According to Feng Shui, the fortunate frog represents good health. It is also believed that keeping the frog figurines will protect everyone in the family’s health. Additionally, the money toad’s crimson eyes drive away evil spirits and negative energy.

The money frog is a lucky sign in Feng Shui, and its appropriate location encourages cleanliness in the home. Keep the space clear of debris and clean around the frog figure. Any fortunate frog figurines that are broken or damaged shouldn’t be kept.

Disclaimer: The views of this expressed above are for informational purposes only based on the industry reports & related news stories. Navimumbaihouses.com does not guarantee the accuracy of this article, completeness, or reliability of the information & shall not be held responsible for any action taken based on the published information.
TagsA sign of wisdomBenefits of Feng Shui FrogBrings money and successFeng Shui FrogFrog Figurines In The HomePlacing the frog according to Feng ShuiSign of good fortune
Back to top
Also Read