Panvel will soon be able to connect to the internet.

With various infrastructures being built to boost mobility, New Construction Projects in Panvel, Mumbai, and other places’ connection is set to improve even more. This would make life much easier for the residents of Navi Mumbai and will also spur economic development in the area, Panvel Navi Mumbai. 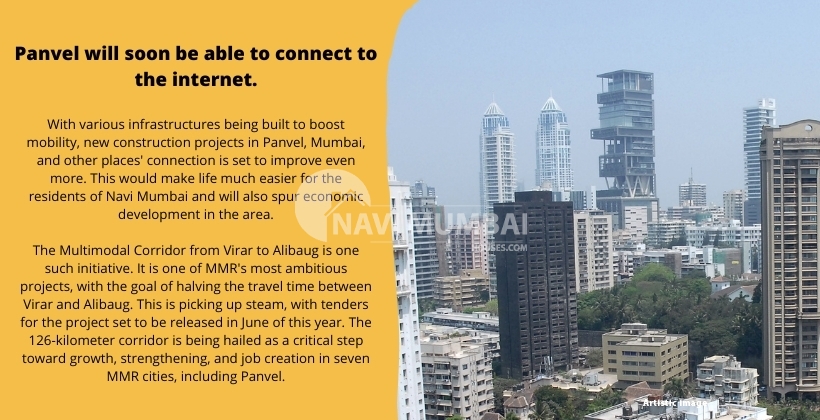 The Multimodal Corridor from Virar to Alibaug is one such initiative. It is one of MMR’s most ambitious projects, with the goal of halving the travel time between Virar and Alibaug. This is picking up steam, with tenders for the project set to be released in June of this year. The 126-kilometre corridor is being hailed as a critical step toward growth, strengthening, and job creation in seven MMR cities, including Panvel.

Panvel’s expansion has been accelerated by the government’s building of five metro lines. It is in the works to meet future transit demands and stimulate development in the Navi Mumbai zone. Two of the five corridors run via the Navi Mumbai International Airport and are given priority because of their proximity to the airport.

After the Navi Mumbai Airport Project was announced, the CST Panvel Rail Corridor was given a new lease on life. The train line would run directly from Chhatrapati Shivaji International Airport to Navi Mumbai Airport. What could be better than the two lines crossing at Nerul, right before the under-construction Nerul-Uran line railway bridge over Palm Beach Road?

The state government has designated MMR’s first planned Aerocity — a 500-square-kilometre area surrounding the Navi Mumbai airport as NAINA – as a planned development area. This region is intended to be developed holistically, with residential, business, hotel, entertainment, and health elements all contributing to Panvel’s growth.

Panvel is set to have a brighter future than ever before! It’s critical to examine the advantages of relocating to Navi Mumbai’s next-big-locale – attractive property pricing, modern business and residential attractions, and a finger on the connectivity pulse.

The property market in Panvel has reopened. A Quick Overview

New Panvel, an emerging development in Raigad District, is one of Navi Mumbai’s fastest-growing nodes.

New Panvel is a neighbourhood of Panvel, which is part of the Raigad District. It is also regarded to be one of the Navi Mumbai nodes that have grown significantly in recent years. The region is split into two halves. Panvel east refers to the section of the Panvel-Roha Central Railway on the eastern side, whereas Panvel west refers to the section on the western side. Each section is further subdivided into sectors, with 23 sectors in the east and 19 sectors in the west. The Khanda Colony Flyover, also known as the New Panvel East-West Flyover, connects the two halves of the town.

This town’s history may be traced back to the Mughal era. The Khandeshwar Mahadev Temple, which is located next to the beautiful Khandeshwar Lake, is also located in Panvel.

New Panvel real estate has seen a continuous increase in demand due to its strategic position between the two major cities of Maharashtra—Mumbai and Pune. MIDC is in charge of the region, as well as adjacent New Panvel towns including Nagothane, Khopoli, Patalganga, Taloja, and Roha. In recent years, many commercial projects have been developed in this region.

CIDCO has also begun work on a new node in Panvel’s Takka Naka neighbourhood, which is densely forested with mango trees. Panvel is located at the intersection of three highways: NH-4, NH-17, and NH-4B. Panvel benefits from a wide range of public transportation and connection choices due to its central location, since it is often served by NMMT and BEST buses. These buses go between Panvel and Navi Mumbai mainly. The NMMT bus stop is conveniently placed near the railway station. ST buses also run between Panvel and the nearby towns of Kalyan, Badlapur, Dombivali, Thane, Uran, and Dadar. Panvel is also connected to Vashi and Thane via the railway station.

Near New Panvel, there are a number of job centres.

With its rapid expansion, the area is anticipated to quickly become a major IT hub, providing inhabitants with numerous job possibilities.

New Panvel has schools and other social facilities.

The proposed Navi Mumbai International Airport is projected to change New Panvel’s price patterns. Apartments in New Panvel are expected to cost approximately Rs 4,618 per sq ft on average. The apartments’ average unit size ranges from 407 to 2,530 square feet. In the last six months, the price of real estate in the region has risen by 25.6 per cent.

The Benefits of Investing in New Panvel

Many recent developments, such as multi-story residences in New Panvel and projected commercial, residential, and infrastructural projects, have contributed to Panvel’s real estate expansion. Tulsi Constructions, Group Riverside, Indiabulls Greens, Platinum Constructions, and others are well-known builders in New Panvel. Property investment in New Panvel is projected to yield high returns in the future, based on current patterns and forthcoming projects, New Projects in Panvel.

We are the Real Estate Web Portal to Buy Sell and Rent properties in Navi Mumbai, Mumbai, and Thane. We can help you Buy Properties at Affordable Prices at your desired location. For more information Call Us On +91 8433959100

Disclaimer: The views of this expressed above are for informational purposes only based on the industry reports & related news stories. Navimumbaihouses.com does not guarantee the accuracy of this article, completeness, or reliability of the information & shall not be held responsible for any action taken based on the published information.
TagsProperty market in New PanvelProperty market in Panvelreal estate news in navi mumbai
Back to top
Also Read 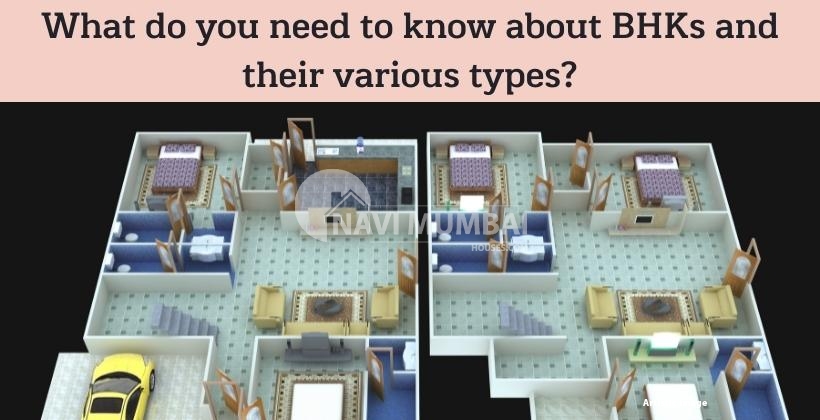