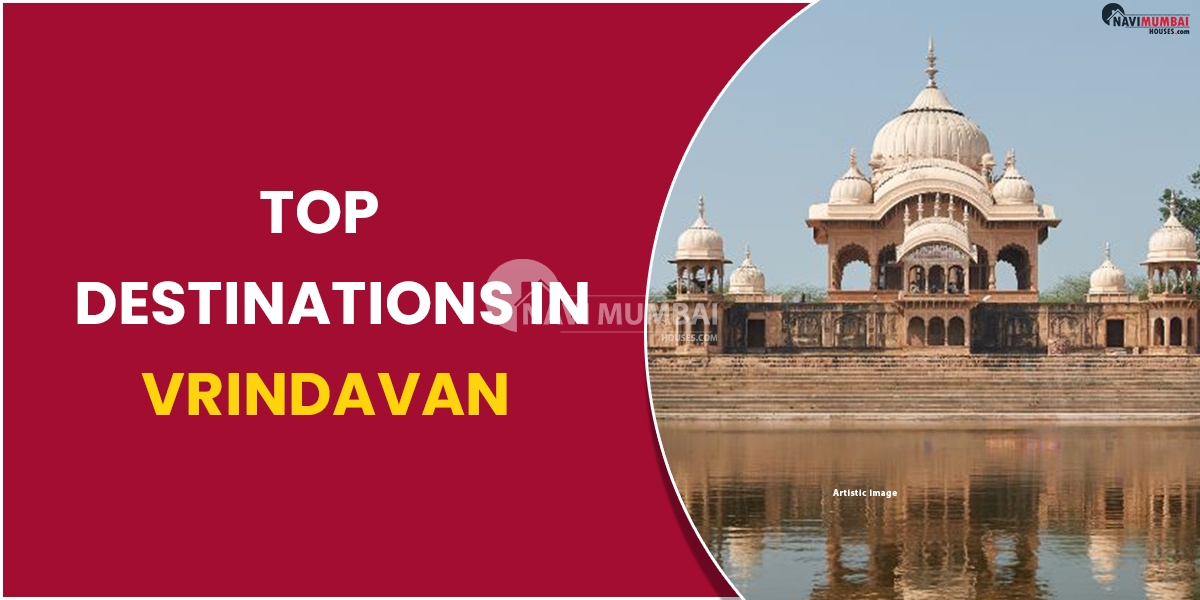 Destinations in Vrindavan: Like many other towns in Uttar Pradesh, Vrindavan is one of the ancient locations mentioned in the revere Hindu scriptures. These writings originate from history. Vrindavan is one of the two holy cities that are thought to be twins. The name Vrindavan refers to the ancient forest that once covered this area; today, only two small groves of the greater forest remain. Hindus consider Vrindavan to be one of their most sacred locations since it is commonly accepted that this is where Lord Krishna spent his young years.

By air: The closest airport is Indira Gandhi International Airport in Delhi, which is situated around 150 km. The trip to Vrindavan would take roughly three and a half hours by cab.

By train: The closest substantial rail hub is located 14 km, at a sizable railway station in Mathura. There are private auto-rickshaws, buses, and taxis that run between Mathura and Vrindavan. From Mathura to Vrindavan, a commuter train is accessible.

By automobile: Vrindavan is easily reachable by car, especially from the major towns in the state of Uttar Pradesh, because to its location on National Highway 2. It is not difficult to get to Vrindavan by car because the vast majority of the highways heading there have been nicely planned.

Are you looking for flat on rent in ambernath?

Following is a list of the top 10 places you should visit while you are in the area if you are confident that you want to pay a visit to this sacred location. 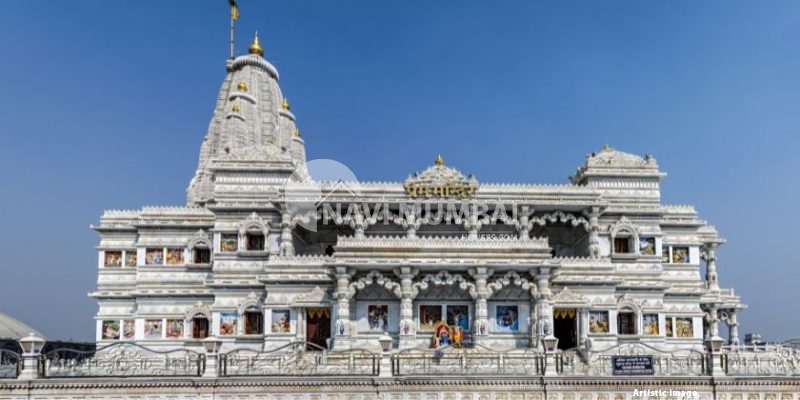 One of Vrindavan’s most significant and substantial temples, the Prem Mandir, or “temple of love,” is dedicated to the worship of Lord Krishna and Radha. The first stone was laid for the temple in 2001, but it wasn’t until 2012 that it welcomed visitors. This massive temple cost over 150 crores of Indian rupees to construct. 54 acres of land make up the massive Prem Mandir compound.

The two-story marble temple represents the spiritual and cultural importance of the city. The interior of the temple is decorated with stunning artwork that reflects Radha and Krishna’s Leela. The entire temple is encircled by a sizable garden with a wide array of lovely flora, fountains, and illumination. Massive sculptures of numerous gods and goddesses are also present in the gardens, with Rasa Leela being the most well-known.

Every evening, worshipers pray and sing beautiful bhajans as artificial lights shine on the temple’s white stones, creating a spectacular light show. The light show takes place every evening from 7:30 to 8:00 p.m. 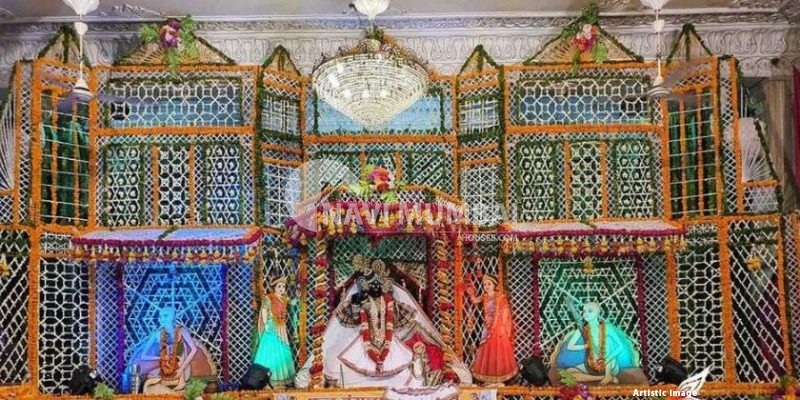 With its enormous windows and magnificent brickwork that has been moulded into elaborate sculptures, the temple has a grandeur that is truly Rajasthani. The antique from this temple was once worshipped as Kunj Bihari, which is Hindi for “water lover.” The noise created by bells and conches is thought to irritate Lord Krishna.

Therefore, neither of these instruments can be found in the temple. Individuals sing Radha and Krishna songs solely utilizing their voices.

While “Bihari” denotes an enthused person, “Banke” means “bent or twisted in 3 places.” The Shringar, Rajbhog, and Shayan are 3 separate ways in which the lord performs all of his daily chores. The lord bathes and gets dressed in Shringar, a big banquet is provided in Rajbhog, and he sleeps in Shayan.

Every day of the year, devotees attend the Banke Bihari temple because it is one of the holiest places in the world for the worship of Lord Krishna. Without a doubt, this is one of the most visited tourist attractions in the city.

Mathura, which is roughly 12 km, is reachable by bus, pace, and taxi. NH-2 travels through Vrindavan on its way to Agra. There are numerous buses that travel between Agra and Delhi that stop at this temple, which is 7 km off the National Highway. Since there are numerous options, you can travel to the temple at any time of day by tempo or rickshaw. 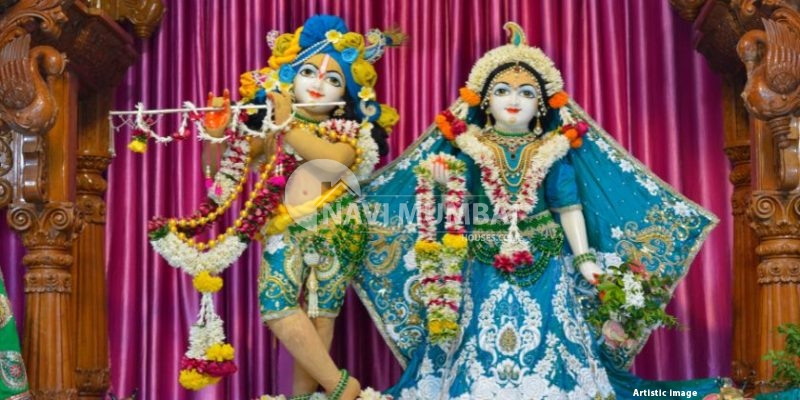 One of the most well-known temples in all of India is ISKCON, Vrindavan. Many people also refer to it as the Krishna Balaram Mandir. The temple was built starting in 1975, and it was finished in 1977.

Visitors are greeted by a huge white marble archway that leads to the grave of Iskcon’s founder, Srila Prabhupada. The temple doors are also enormously scaled and fully carved from oak.

You will have the chance to witness devotees dance to the astonishingly lovely and mystical music of the prayers, known as kirtans. Harmoniums are used to compliment this tune. If you would prefer to pay a price, you can book a room in Iskcon through their website.

Visit the ISKCON Temple from February through April and from October through December. Travelers should go at this time of year because the weather is great and the temple is open. Take an auto rickshaw or reserve a private vehicle to get to the ISKCON Temple in Vrindavan. The closest train station, Mathura Junction Railway Station, is 17 km from this temple, which is approximately 167 km from Indira Gandhi International Airport in New Delhi. 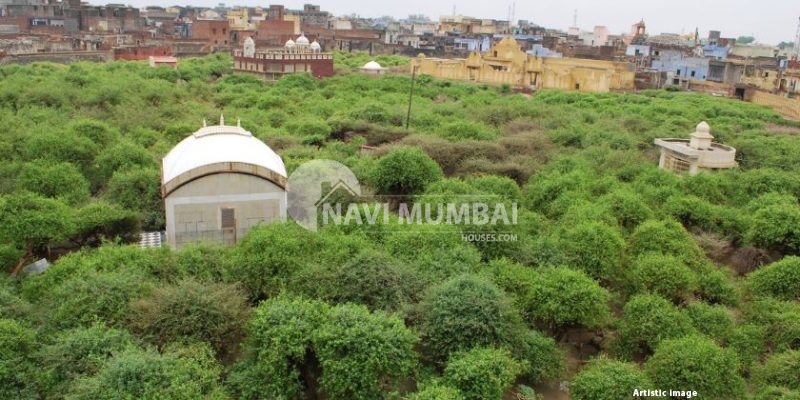 A lovely and sizable garden called Nidhivan is sometimes called Seva Kung. It is one of the most well-liked vacation spots in the Vrindavan area. All seasons and times of the year, this place is crowded with people. The same number of legends and tales surround this place. Others assert that this exact garden was the setting for Lord Krishna and Radha’s Rasa Leela.

According to some myths, Lord Krishna would enter the garden at all hours of the night to dance with his Gopis. As a result, guests are not allowed to enter the Nidhivan garden in the afternoon or evening. In the garden that is a part of Nidhivan, you can witness more than 1,500 Tulsi trees.

In spite of being in the middle of Vrindavan, Nidhivan can only be reached by rickshaw due to the narrow roads there. To reach Mathura, travel approximately 12 km. 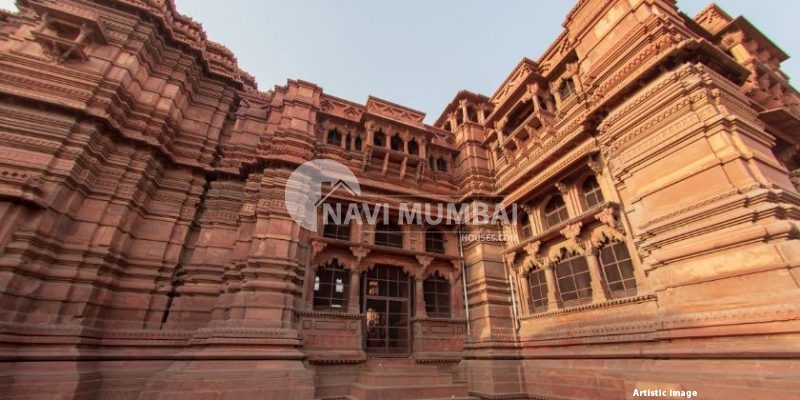 It is a Govind Dev temple, which is another name for Lord Krishna. This temple has 7 levels and is incredibly beautiful. The Govind Dev temple’s structure is unlike traditional temples in both appearance and purpose. This temple’s design combines elements of Muslim, Hindu, and Western architectural cultures. Red sandstone was used in the construction of the Greek cross-shaped structure.

The temple has an outstanding aspect due to the columns and arches that make up its façade, which resembles a European church. Since it is located on a high platform, one must first climb a flight of stairs to access the magnificent lobby. The temple is decorated with flowers for Janmashtami and Holi. One of the ceiling features in the grand lobby is a sculptured lotus that weighs many tonnes.

The months of October through February are the best times to go to the temple. The visit is made even more delightful by the lovely and relaxing weather that lasts the entire day.

The Govind Dev Temple is 2 km from a bus stop and a train station. You can take an auto-rickshaw or a cycle-rickshaw to go to Govind Dev Temple. Other transportation options that can improve the journey include taxis and cabs. 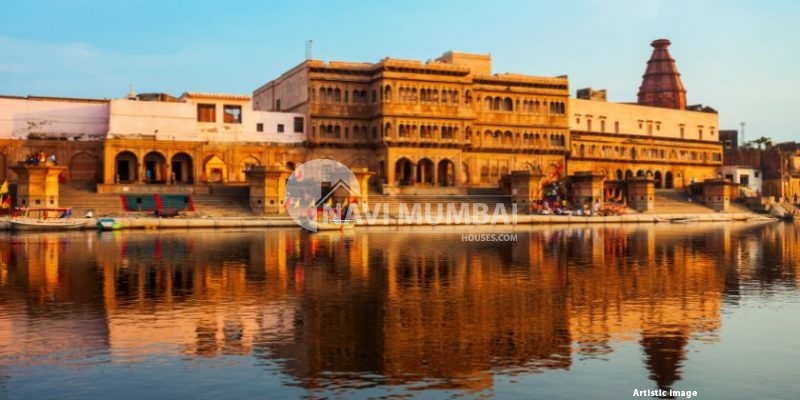 Most people agree that Kesi Ghat is one of the most significant Ghats to be discovered along the Yamuna’s borders. Visitors come here frequently in the morning. According to myth, after killing the demon Keshi, Lord Krishna bathed in the Yamuna River to rid himself of the monster’s blood. As a result, Kesi Ghat is renowned for being one of Vrindavan’s most intriguing places to visit.

The enormous Madanmohan Temple, which is in the back, also provides an amazing ambiance. The option of taking a boat tour is also available here.

The best time to visit Vrindavan, which includes Keshi Ghat, in northern India, is from October through March. Visitors to the Ghat don’t have to worry about getting sunburn or dealing with the harsh heat that is typical during this time of year because it is cooler throughout the winter. It can be reached by the Mathura Vrindavan Marg and is 13.1 km far from Mathura. 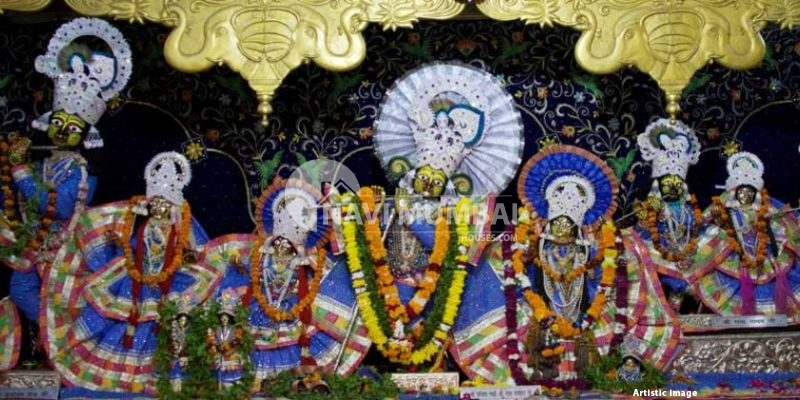 The temple itself is divide into two halves. Rupa Goswami is honor in the Samadhi hall and the Bhajan Kutir, also refer to as the prayer hall. Jiva Goswami want to preserve the Goswamis’ initial handwritten writings; therefore he had a library built on the grounds of the temple.

Although it is open all year round, it is said that visiting the temple is most enjoyable from October to March. You may easily move around and take in the area’s beauty to a greater extent because of the mild and pleasant weather. From anywhere in the city, you can travel here with any e-rickshaw in Vrindavan. From Keshi Ghat, it will take you around 5 min to get there. 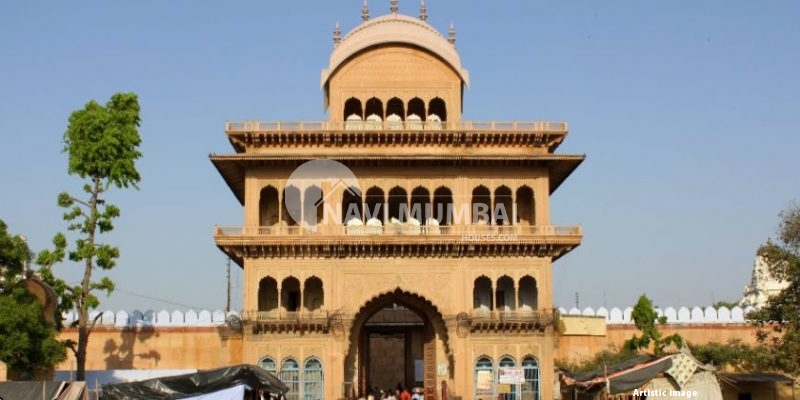 The Shri Rang Nath Ji Mandir is one of Vrindavan’s most fascinating places to visit. Lord Rangji, who is commonly recognize as an avatar of Lord Vishnu, is the subject of the Rangaji temple. The main attraction of this temple is the Dhwaja Stambha, which is 50 feet tall. The temple grounds also include a water tank and some extremely lovely plants. The Rangaji temple receives the most tourists in the months of March and April during the Brahmotsavam Festival.

The optimum periods to visit the temple are from October through December and from February through April, when winds are normally in the middle of the range. A private cab or an auto rickshaw can take you directly to the Shri Rangji Temple in Vrindavan, which is only about 11 km from Mathura. 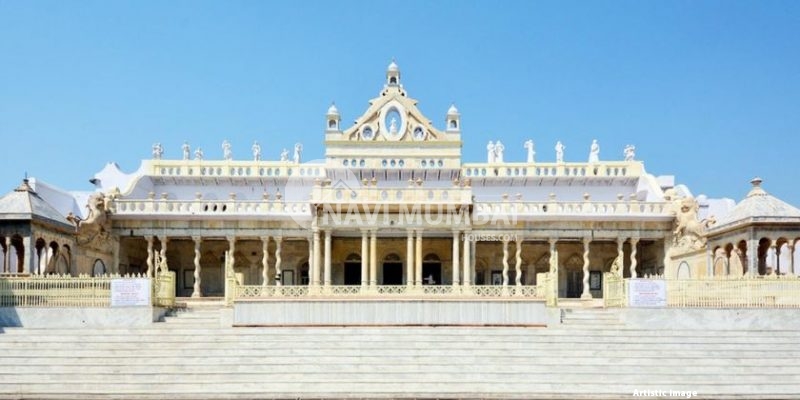 The Shahji Mandir in Vrindavan was construct mostly thanks to the contributions of wealthy Lucknow jeweller Shah Kundan, who died in 1860. Chote Radha Raman, an avatar of Lord Krishna, is the object of worship in this temple.

The temple features a particular marble architectural style. A room inside the temple called Basant Kamra is fill with stunning artwork and Belgian glass chandeliers.

This room’s walls are similarly decorate with elaborate engravings. Additionally, you will find beautiful and in-depth artwork that tells the story of Lord Krishna’s life. This chamber is only open to the general public twice a year, but you can always see in through the glass. 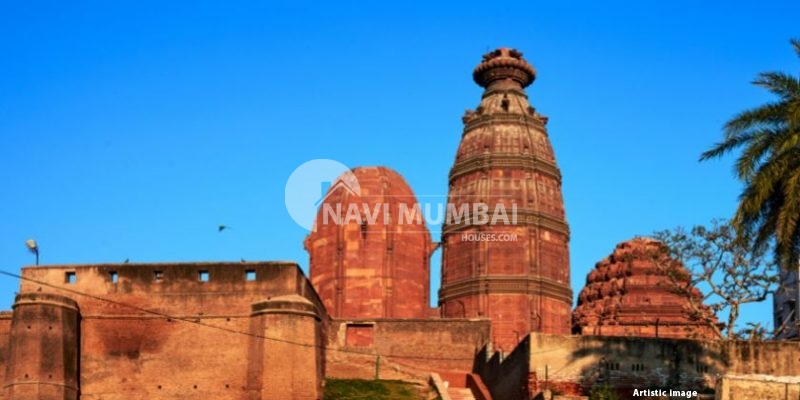 The Madan Mohan temple, previously known as Madana Gopala, was construct by Sanatana Goswami. The most well-known god in this region is Lord Madan Gopala, and the stunning structure of the temple is a key attraction. The 20-meter-tall, oval-shaped temple was construct from red sandstone.

The flour and water that Santana Goswami is said to have prepare and given to Lord Madan Mohan. While he was traversing the streets are being offer at the shrine today.

You will have the most fun visiting the Madan Mohan temple and exploring the lanes of Vrindavan between the months of October and April. Which correspond to the winter and spring seasons.  The weather is crisp, fresh, and pleasant during this season, and the city also comes to life with a number of celebrations that take place back-to-back in fast succession.

You’re looking for New Projects in Kharghar we have the Best New Projects Kharghar like Ready to Move & nearby possession:  https://navimumbaihouses.com/properties/search/kharghar/

Disclaimer: The views of this expressed above are for informational purposes only based on the industry reports & related news stories. Navimumbaihouses.com does not guarantee the accuracy of this article, completeness, or reliability of the information & shall not be held responsible for any action taken based on the published information.
TagsDestinations in VrindavanVrindavan
Back to top
Also Read