Dreams of many Navi Mumbaikar’s of having cost-effective luxurious houses are finally going to fulfill. Maharashtra Government has started off the construction with highly technologized equipment and machines to build up a 21st-century urban town- Aerocity in Navi Mumbai.

The Aerocity project is spread over 300 hectares of land, the aim is to develop it as a lavish place near the airport, which will give a significant look to nearby areas including the airport. This project is handed over to various departments, and a separate team is allotted for resource utilization.

CIDCO currently has shared that the project will be divided into four packets with the acquisition of land having been concluded. The project is still in process of raising its fund for development. International consultants have been hired for performing marketing assessments, techno-economic feasibility, among other related tasks. CIDCO is also considering numerous revenue models for Aerocity. The project aims to develop modern towns including schools, colleges, hospitals & many more things for the amazement of people. This atrocity town is going to be the next leisure place for all the Navi Mumbaikars.

As the airport will remain the main attraction of this town, it is going to be constructed with an international facility in main. The project will also have an entertainment mall, which will be constructed with dreamy tiles of cartoons & 3D arts giving it a full touch of 3D mall. The Aerocity will be fully targeted as modern look, the work for its drainage system is also made to preserve the environment. On average 40-50% space is allotted to hotel services.  Firstly there are going to be 10 multi-star hotels with commercial development & entertainment mall & hospitality services. Commercial development is also pursued under this town once the existing market plan is accomplished. The commercial development airport ecosystem will also be taken under supervision. Various stakeholders & agents will be able to run this commercial hub with their comfort and convenience. The development is controlled by the assigned development committee which has given the blueprint of the whole project which sounds like a big-budgeted town planning with a pure intention of developing it in an international manner in nature.

Although the work for its airport has begun and it looks quite promising. As the commercial hub is also going to develop, funds are also being taken from the stakeholders & investors, which will be beneficial for the holders in return. Special international consultants are hired to guide this town and to make it more promising as it seems. All the technology is used in an eco-friendly manner and by keeping the market dynamics in mind. This project will become the new identity for our country & people, and it will take countries’ development to the next level by making a proud moment for the country. This town development will also take Navi Mumbai from developing to a more developed city with new and modern techniques.

On average 40-50% space is allotted to hotel services, currently, 15 hotels are under construction with an overall 30 hotels project. Mainly all hotels are five-star and based on multinational facilities. Land distribution for every service is done equally keeping in mind its usage, the development is carried out. Housing complexes and bungalows are architecture in a hybrid way between a building and a constructed landscape, an earthwork. It’s a balancing act between the human experience, environmental and cultural sustainability.

New metro lines are expected to be announced in the upcoming year at this Aerocity Project for the flexibility of people coming from various parts of the city. The concept of metro lines and their design has been finalized by the Maharashtra Government.

The Navi Mumbai Aerocity will also offer a systematic arrangement of all the utilities with the proper tunnel plan. This tunnel plan will help to avoid the digging of roads any further and also will provide ease of maintenance in the coming year. As the project will also offer the central command and control operation to manage all its utilities. The concept for the tunnel plan and its design has been finalized and shortly will take into action by the authorities.

As the construction of infrastructure will begin in a short period, the revenue options are also taken into consideration by the authorities. Various options are taken for collecting revenue funds. Delhi international airport Aerocity has also done the one-time payment and is also awarded with the right to handle the project and turning it into reality with the help of the Navi Mumbai authority. As the government has started creating awareness about this project among various firms and business investors, for raising its funds. As the awareness is generated using digital medium regarding the benefits of investing in this project and the future of Aerocity.

Taking Indian Architecture to Next Level

This Aerocity plan will change the whole look of the city with its international identity and will flourish Indian architecture to the next level by raising the benchmark of building such a huge budget as well as flourishing the beauty of Navi Mumbai as well as pan India recognition followed by international status and recognition overall around the globe.

Disclaimer: The views of this expressed above are for informational purposes only based on the industry reports & related news stories. Navimumbaihouses.com does not guarantee the accuracy of this article, completeness, or reliability of the information & shall not be held responsible for any action taken based on the published information.
TagsAerocity By CIDCOAerocity Navi MumbaiNew Project By CIDCONew Project By CIDCO At Uran
Back to top
Also Read 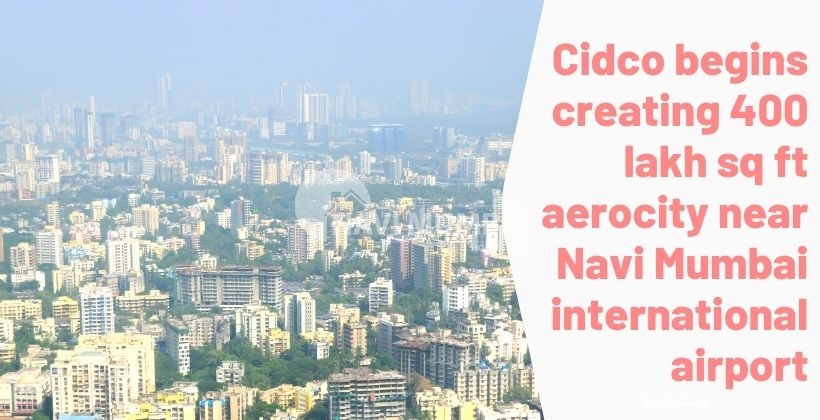